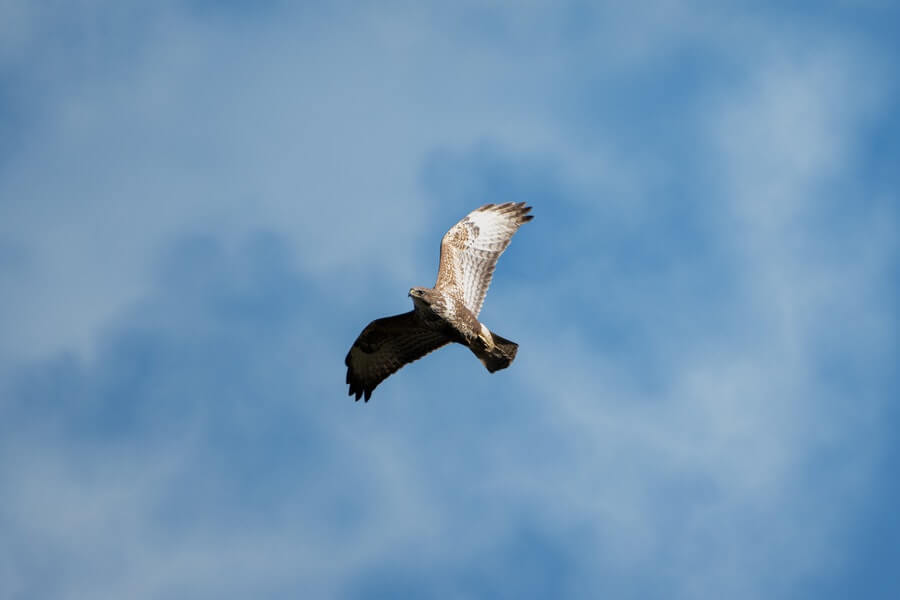 Some of the most majestic birds in the animal kingdom are also the deadliest for other smaller birds and animals. Birds of prey are deft hunters with impeccable vision that allows them to spot their prey from great heights before swooping down to snatch the unsuspecting little critter and taking it to a safe place to devour. The UK is home to some of the most beautiful birds of prey and to know them is to love them.

How Many Birds Of Prey Are There In The UK?

In the UK, there are around 15 species of birds that fall under the category of “birds of prey”[i], and although many people consider them a threat to other species of birds and animals, they are protected under The Wildlife & Countryside Act 1981[ii]. It’s also worth noting that as savage as they may appear, these wonderful birds are integral to nature’s ecosystem and keep populations of rodents and reptiles in check. Understanding the different birds of prey in the UK will help you live in harmony with these magnificent creatures.

Birds Of Prey In The UK

As mentioned above, there are around 15 species of birds of prey in the UK, and you may very well have one or several of them in wooded areas around your home. Take a closer look at each of these species and see how many of them you can identify next time you hit the nature trails. It is important to note that The Wildlife And Countryside Act 1981 protects all UK birds of prey, with a few very specific exceptions. [iii]

The Red Kite is a graceful bird of prey that lives mainly in Wales, with somewhat smaller populations in England and Scotland. They tend to live in wooded areas, in the countryside and even in the suburbs with ample trees. This beautiful bird has a reddish-brown body with angled wings and a forked tail. The underside of the wings is often lighter coloured. There are about 4600 breeding pairs of Red Kite in the UK.

For all its small stature, the Sparrowhawk is quite an aggressive bird. It is also one of the most common birds of prey in the UK. Male and female sparrowhawks are quite different in appearance. For one, the females tend to be larger than males. Females and their young are usually brown with the males being the more noticeable with bluish brown backs and wings with orangey-brown stirpes on their chests.

The Goshawk is a fierce-looking bird in the hawk family. Its piercing eyes, sharp talons and beak make it a skilled hunter, but what really sets this bird of prey apart from other is its broad wings. These majestic birds can be black or brown with creamy, grey or white stripes. The Goshawk can fly at impressive speeds, even under the canopy of trees, earning the nickname the Phantom of the Forest. Its long legs and talons allow this bird to capture its prey in mid-flight and it can also swoop down to capture small mammals on the ground.

The peregrine falcon is a stunning bird with slate grey wings with a white, flecked underside and black bars across its chest. It has piercing black eyes and a pronounced hooked beak. Their numbers dropped to alarming levels but thanks to their being protected under The Wildlife And Countryside Act, they now enjoy a green conservation status with 1500 breeding pairs in the UK. These birds were often prized by the aristocracy and a famous for their speed while flying.

The Osprey is a rare bird of prey with brown feathers on their backs with a mottled white underside. Their beaks are hooked and very powerful. They also have long legs and talons which are designed to snatch fish from the water with ease. Osprey are migratory birds and migrate from Africa to the UK during warmer months.

The golden eagle is common in many places around the world and in the UK. These large birds of prey have predominantly brown feathers with black tips on their wings. Their underside is often cream-coloured or white and they have yellow legs and hooked beaks. The golden eagle is quite a common sight in many areas of the Northern Hemisphere. In the 19th century, these majestic birds were all but eradicated in the UK, but thanks to conservation efforts, they are back in the UK in healthy numbers.

The sea eagle is the UK’s largest bird of prey and can often be seen flying over water hoping to snatch a fish. This beautiful bird has blackish-brown feathers with tan-coloured feathers on the head. They may also display some cream or white feathers on their wing tips. Their beaks are a bright yellow with a pronounced hoot that is very powerful.

Buzzards are the UK’s most common birds of prey and can be found soaring through the air in almost every county within the country. Their name often has people confusing them with other birds of prey, such as vultures or condors, but the buzzards found in the UK are more related to eagles and hawks. Their feathers can be in different shades of black and brown with some white under the wings with yellow beaks that are hooked and powerful.

The European Honey Buzzard, also known as the pern, is quite a beautiful bird, for all that it is a bird of prey. While the numbers in the UK are somewhat alarming, their numbers have been increasing in recent years due to extra protection with certain conservation laws. They can be found in various shades of brown or black with some honey buzzards displaying feathers in shades of grey, cream and white. These birds have short yellow beaks with a slight hook.

The hen harrier got its name from originally swooping down and preying on free-range chickens and other fowl. Their numbers have been seriously affected due to being hunted and shot by farmers and hunters as the hen harrier was a threat to grouse populations. They now enjoy extra protection so their numbers are on the rise again.

The marsh harrier is the largest of the harriers and the males have some vividly beautiful colouring. While the females and juveniles have brown, black and cream feathers, the males have a more eye-catching display with the addition of grey and white. Their bodies have a distinctive “V” shaped formation in brown or black with the rest of their wings flashing with pale grey or white.

The Montagu’s Harrier is possibly the UK’s rarest bird of prey and their locations are generally kept secret to prevent their eggs being stolen by poachers. The numbers in the UK have dropped to alarming numbers and they are protected under various conservation protection laws. The females of this beautiful bird are dark brown while the males are mainly grey with black wingtips with a black stripe on the underside of their wings.

If you’re on the lookout for a Kestrel, don’t look in the trees as kestrels don’t seem to like densely forested areas. They have, however, adapted quite well to urban areas and can even be found in some cities. These birds are a smaller size, and their feathers are brown or black. They may also have a brilliant splash of red and orange on their wings. Their wings are pointed and they have long tails.

While the merlin may not be a native UK bird of prey, it has taken up residence in the UK due to the climate. These birds, like many others, have made the move to the UK from areas further north such as Iceland. Merlins are the smallest birds of prey (UK) and have quite the rapid wingbeat. The males are mainly black or brown with blue wings and white around the neck.

The hobby is a bird with great flying skills. This small, slim bird is capable of accelerating with intense speed and even includes a lot of impressive aerial moves. It will chase its prey and even scare off larger birds. These birds have long pointed wings and large talons that they use to swoop and grab their prey. They have black, blue or brown feathers and white or grey stripe formations on their bodies.

Our Birds of Prey In The UK

No matter where in the UK you live, you are sure to encounter birds of prey. While you may consider them a nuisance, think of the important role they have in keeping the numbers of rodents, reptiles, insects and other animals to levels that are optimal for that area. Birds of prey UK are also essential at keeping their habitats clean of weak animals and their carcasses. You can help increase or maintain viable numbers of these wonderful birds but making sure nothing you do can cause them harm and even leave wild bird food out for some of them. Do your bit to prevent some of these majestic birds from disappearing from UK shores.