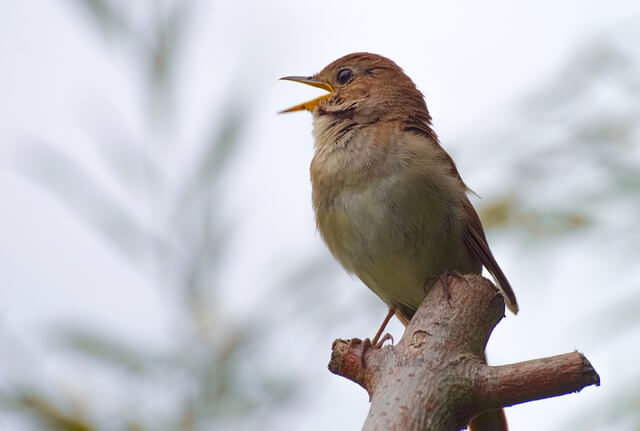 Experts believe that the UK has a breeding bird population of around 84 million pairs[i]. Despite this, there are many bird species in the country considered ‘rare.’ This may mean that they are infrequently spotted, or they’re endangered and possibly even extinct. The figures for some of these birds seem dire, but many bird watchers still go on the hunt for them, hoping to prove that these beautiful creatures are still thriving in the wild.

What is the rarest bird in the UK?

We can’t say for certain what the rarest bird in the UK is as population sizes change frequently, but the Ruff and Red-backed Shrike have very small breeding pair numbers which have put them high up on the conservation list.

The Top 10 Rarest Birds in the UK

The UK is home to many birds considered rare. A bird is labelled rare if it doesn’t breed in its province and has travelled past the recognised limits of its species range. Many of these bird populations have reduced drastically over recent years; however, you can still catch a glimpse of them, if you know where to look.

This bird of prey got its name from its natural predation on free-range poultry. However, the effect on farmer’s livelihoods continues to cause disputes and has had a severe effect on their population.

Identification: Male hen harriers are pale grey in colour while females are brown with a white rump, and both have a long, barred tail that provided their nickname of ‘ringtail’.

Diet: Despite their favour for fowl, hen harriers will also feed on small mammals, such as voles, and birds, which they fly low to the ground to catch.

Location: The preferred habitat of these hawk-like birds is open spaces with little vegetation, and they are often found in the moorlands of Northern England, Northern Ireland, Scotland and Wales.

Identification: Male capercaillies are large with primarily black feathers, whereas females are smaller with brown and white feathers.

Diet: Capercaillies are mostly ground feeders, with their regular diet consisting of the berries, shoots, stems and buds of local trees and plants.

Location: The capercaillie is a breed native to Scotland, found only in native pinewood areas.

Famous for their clear, rich song that very few species can match, nightingales populate woodland areas, creating their nests in the protective undergrowth there. It’s believed that their decline in population is due to the rise in numbers of deer that have been exploring the nightingales habitats, trampling the woodlands that they nest in.

Identification: Nightingales are slightly larger than robins, coloured a similar shade of brown with a broader tail.

Diet: They feed mostly on insects, particularly ants and beetles, and are extremely territorial during breeding.

Location: Nightingales are more commonly seen in woody areas of the southeast of the UK, including Essex, Sussex and Kent.

Nightjars are a nocturnal species, hunting at dusk and dawn. Their population has been in decline since the early 2000’s due to the loss of their habitat, which is primarily heathlands, moorlands, open woodlands and sometimes conifer plantations.

Identification: Nightjars are about the same size and shape as kestrels, with brown and cream feathers and a long, thin tail.

Diet: They feed mostly on insects, including moths and beetles, but are believed to be able to secretly steal milk from goats.

Location: Similar to Nightingales, Nightjars are more commonly found in southern England, with high numbers being reported in Dorset, Surrey and Suffolk.

Roseate terns are coastal birds whose habitats and nesting areas are constantly threatened by humans and predators alike. This is because the terns make their nests in the ends and breaks of beaches, and other species constantly interfere with these spaces. To protect their nests, roseate terns breed in colonies, often including other species of bird, however breeding in the UK has been restricted to only a handful of colonies.

Identification: Roseate terns are similar to regular terns, only they are a brighter white with longer tail feathers. Their name is derived from the pinkish colour that the underparts of adults turn in the summer.

Diet: They favour a diet of fish and crustaceans, which they are able to plunge-dive to retrieve.

Location: Roseate terns are mostly spotted off of the Northumberland coast and around Anglesey in summer. Passage birds may be seen around the south and east coasts.

The ring ouzel, an uncommon bird even before its population decline, is often mistaken as a blackbird. There are signs of decline in several countries that the ring ouzel is known to populate, and this is believed to be due to climate change.

Identification: They can be distinguished by their white upper breast, slightly smaller size and longer tail, although their sleek black feathers are easily confused.

Location: They prefer grasslands, usually complete with the cover of heather and bracken, though they can be found on rock ledges. Although migration can lead them to the east and south coasts, ring ouzels are usually spotted in Scotland, Northern England and North Wales.

Identification: Relatively small in size, the Willow Tit is characterised by a distinctive sooty, black cap and soft, grey back feathers with a snowy underbelly.

Location: The Willow Tit lives in woodland, but can also be found in urban and suburban locations.

The population of Ruff in the UK has been dwindling. They are migrating birds who come across to the UK from Scandanavia and then move on to Africa during the summer.

Location: They live in wetland sites. You can find Ruff on the coast of Norfolk in Titchwell.

This is one of the rarest birds in the UK, with few remaining breeding pairs (they are practically extinct in that respect). Known for their striking reddish-chestnut coloured back, they can be found more easily in other countries.

Identification: Similarly sized to house sparrows. Off-grey head and yellowish underbelly with a black, short bill. Distinctive red-chestnut feathers on the back.

Location: There are only a few breeding pairs native to the UK, but you can spot the Red-Backed Shrike in passage whilst they are migrating. Look out for them in coastal areas of the UK during spring and autumn.

Another rare bird that is protected under the Wildlife and Countryside Act, 1981, the Honey Buzzard only makes an appearance in the UK in the summer.

Diet: the larvae of bees and wasps, small mammals and worms

Location: Honey Buzzards nest across the UK. Some locations you can find them are east and north England, and Northern Scotland.

What Is the Rarest Bird In The World?

Currently, the rarest bird in the world is the Bahama Nuthatch.

Labelled as critically endangered but commonly believed to be extinct, this species can only be found on Grand Bahama Island, where habitat loss, predators and extreme hurricanes have impacted the population numbers. The last sighting of this rare species was in the spring of 2018[ix], yet conservation efforts are being consistently increased in hopes that we can save this rare bird before it is too late.

Rare Birds Around the World

Although the UK is home to some beautiful, rare birds, the rest of the world has its own fair share too. The current population of many of these birds remains uncertain; however, that doesn’t stop many enthusiastic bird watchers from hoping to help their conservation.

Bird watching is a hobby with ever growing popularity, but there are several practices that all bird watchers are expected to follow no matter their level of experience.

These guidelines are known as the bird watcher’s code, and are designed to keep both people and birds safe at all times. The five main things it is vital for bird watchers to know in relation to the code are:

How Can You Help Birds?

Birds are an important part of the world’s ecosystem and allowing population levels to continue to decrease could be fatal. You can help birds, rare or otherwise, from the comfort of your own home.