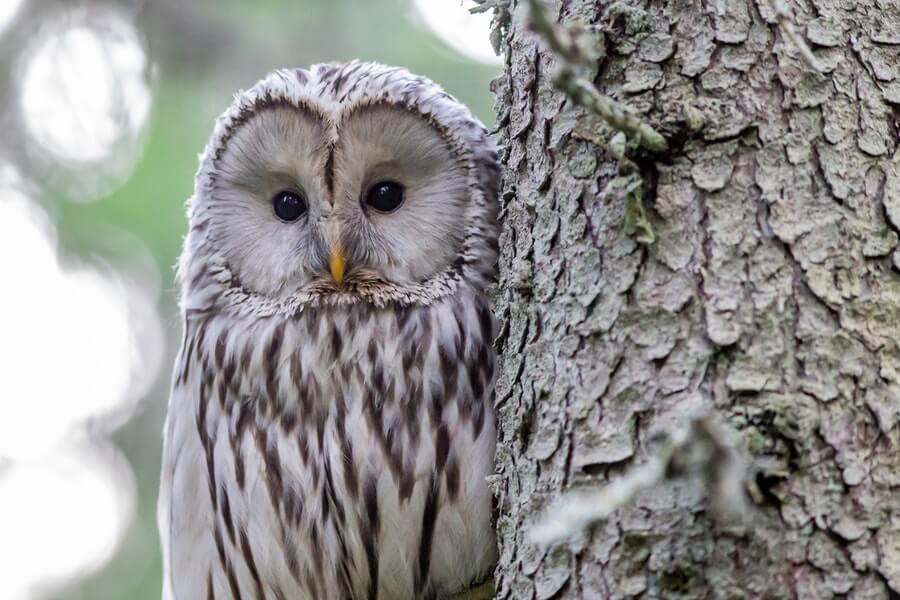 Owls are an elusive species and an important part of Britain’s ecosystem. They are beautiful, elegant, and loved by avid bird watchers around the country.

There are five resident types of owls found in the UK, and some are much easier to spot than others. Although owls aren’t seen as often as other birds, there are several things you can look and listen out for to understand what species of owl you’ve just witnessed, or to help you find the ones you’re just dying to see.

This guide will help you to identify the 5 types of owls in the UK.

Also known as the brown owl, the tawny owl is easily identifiable by its rounded face, which is usually brown or grey, and its under and upper parts of the same colour.

Tawny owls can also be distinguished by their dark, round eyes and their more direct flight style, which is most obvious when flying between trees.

Usually, females are larger and heavier than males. Their breeding period begins around spring, and this is when their vocalisations are most common.

Although these are most often heard at night, tawny owls have been known to call in broad daylight occasionally, using the classic ‘twit-twoo’ call that most people recognise. Tawny owls are highly territorial, with their territory often ranging from 30 to 50 acres, and their typical lifespan is around 4 years[iii].

Do you want to give owls somewhere to rest? Take a look at our popular Fallen Fruits Tawny Owl Box.

The long-eared owl is the rarest of the British owl species, and can be identified from its bright orange eyes and the long tufts of feathers on its head. Although these are known as ear tufts and gave this owl its name, they are not actually the owl’s ears. The owl will raise these when alarmed or threatened to scare away predators.

The upper and under feathers of long eared owls are a mix of pale and dark browns, giving them the unique mottled look that sets them apart from other owls. Their breeding season takes place from February onwards, and this is when they are at their most private. Since long eared owls are extremely nocturnal, they are rarely seen by people, though you may hear them late at night or even uncover a communal roost during winter. They have also been known to recycle other birds’ nests[vi].

The surprising thing about short eared owls is that, although they are nocturnal, they have been known to hunt in broad daylight if their habitat is suitable. Because of this, you may be able to see them flying low around marshes, farms and moors throughout the year.

Long eared owls are recognisable by their white and pale brown spotted underparts, distinguished by a dark brown streak across the upper breast. They have striking yellow eyes and often indiscernible ear tufts on their head, though these can double in size when the owl is threatened.

The short eared owl will usually breed in Scotland and the North of England, and their breeding season starts in March. However, some birds may not mate until May in wintering areas. Some short eared owls migrate to England from Russia, Scandinavia or Iceland for the winter, and you may be able to see them flying in over the sea during this time[ix].

Due to the barn owl’s shrill call, they have earned the nickname screech owl, though they very rarely vocalise. Barn owls are relatively common around the UK and are often seen when driving through the countryside at night.

They are easily identifiable by their startlingly white underparts, which contrast largely with their grey and golden-brown upperparts, and a white, heart-shaped face complete with dark eyes. Females tend to have darker brown feathers around the face and weigh more than the males, who usually have purer white underparts.

Since barn owls are birds of prey, they are specially adapted to hunting at night. They have incredibly sensitive hearing and very strong eyes that allow them to see even the smallest of movements in very limited light. Their nesting period is usually between April – May, and this is when you are least likely to see a barn owl.

Little owls were not originally native to the UK but were introduced by landowners in the 1800s who believed the bird to be a useful addition to Britain’s native bird list. They can also be found across Europe, Asia and North Africa. Little owls are identifiable by their pale-yellow eyes, mottled white and brown upper and underparts and narrow brown face.

They are mostly diurnal and frequently seen during the day sat on exposed perches, though they do the majority of their hunting late at night. These owls are particularly noisy and have a range of calls which can be heard throughout the year.

Usually, these are most often heard in the late winter and early spring as this is when little owls establish their territory. Little owl populations have been declining in the UK recent years, which is thought to be due to the lack of food availability and changing weather conditions. Despite this, population numbers are steady in other areas of the world[xiv].

Owls are birds of prey, meaning they eat other animals. You won’t find them gathered around your bird feeders. An owl’s diet will consist of a mixture of insects, worms, amphibians, and small mammals like mice. Some owls even eat other birds. Find out about other Threats to Birds.

2. What is the most common owl in the UK?

The most common owl in the UK is the Tawny Owl, with an estimated 50,000 breeding pairs populating the UK

3. What is the rarest owl in Britain?

The Long-Eared Owl is the rarest owl species in Britain. There are an estimated 1,500 – 2,000 breeding pairs in the UK, but they are very hard to survey so this number may not be entirely accurate.

4. Which owls screech in the UK?

Barn owls and Tawny owls very occasionally, but the UK isn’t home to any owls which are well known for screeching. There are, however, 25+ species of Screech owls in North & South America.

How you can help owls

Owls are an important part of our ecosystem. As natural pest controllers, they help protect crops and storage areas, plus feed on animals that may be bothering properties in urbanised areas.

Owls are coveted by bird watchers across the country and are admired as good luck charms in many cultures, representing wisdom and beauty. Because of their importance and symbolism, it’s vital that we work to conserve owl species.

For more information on a variety of birds and a range of supplies to care for them, visit us at Love Garden Birds.