You may be lucky to see Wrens visiting your wildlife haven, but what do you feed them? Wren’s will tend to favour live foods but they’re not always readily available especially whilst we are experiencing this unusual warm spring weather, worms tend to bury themselves further underground where’s it’s moist. Only a good rainfall will bring earthworms to the surface. So, a good option to feed Wrens in your garden is nutritious dried mealworms – packed full of protein and an ideal staple food for young Wren chicks. Ideally serve them up soaked in water overnight to make them plump and more palatable. Especially during nesting time. You can rest assured they will also take them away to feed their chicks. 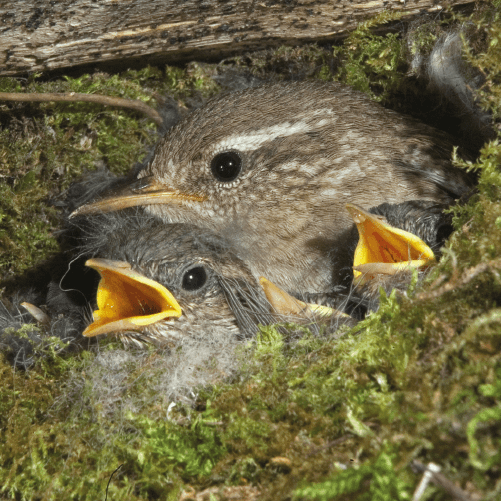 Wrens may eat live foods, but they’re accustomed to eating sunflowers hearts and seed mixes that have dropped on the ground from raised feeders. You may want to add a ground feeder to your bird feeding routine, as Wrens will forage on the ground keeping a low-profile from predators. Use a small mesh ground feeder to serve them up, positioned under a dense bush or vegetation to make them a regular visitor to your garden. You can also use the mesh tray on your feeding station positioned near to the ground. Alternatively, you can always just scatter the mealworms on the ground between the plants to give them shelter from danger or even under the patio table. Noticeably, willing Wrens will eat out of a hanging mealworm feeder talong with many other common small garden birds – but know this is not their favourite place. 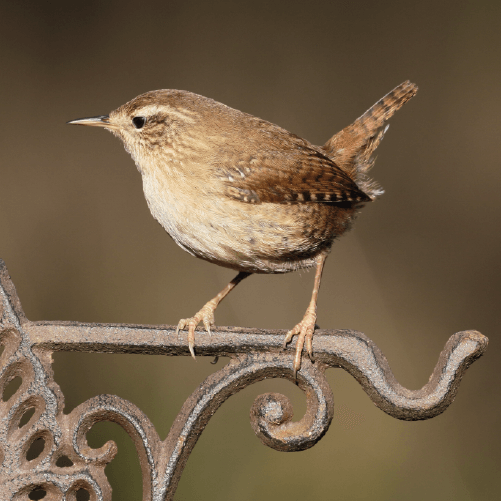 How to spot a Wren?

The Wren is easily recognisable by its rich brown plumage, dumpy and almost rounded body, with a fine bill and a strikingly short narrow tail often held upright. The underparts are paler with grey barring. For such a petit bird it has a surprisingly loud voice and can hit two notes at the same time. Throughout the UK the Wren is the most common UK breeding bird with 8,600,000 territories. So, you may be unaware that you have this frequent visitor in your
garden foraging very actively in dense shrubbery. 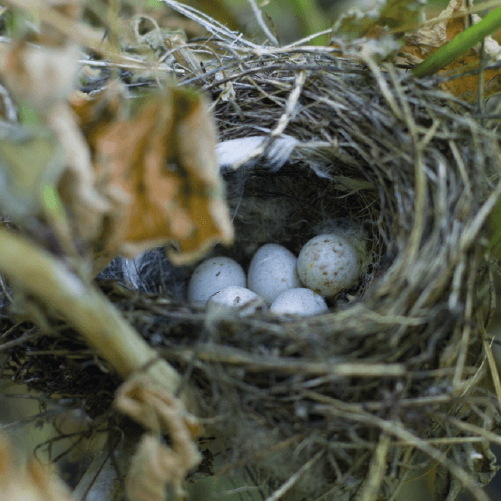 How do Wrens nest?

During courtship the male will sing alerting the female to possible nesting sites. The male and females can often have more than one mate; the females can even move on and leave the current mate to raise their first brood, while she moves to another male’s territory to nest again. Wrens nest in various sites such as cavities, natural tree hollows, old woodpecker holes or narrow openings in buildings. They’re also known to nest in enclosed spaces like flowerpots, parked cars, shoes and drainpipes. These nesting sites are usually positioned low to the ground. The male will build incomplete nests in several places to attract the female to mate – then the female will complete the nest, adding her finishing touches. Each nest is built on a foundation of twigs, topped with softer plant debris, grass, animal fur and feathers.

A Wren can lay up to 7 eggs or occasionally more. All eggs are white and feature several reddish-brown dots. The incubation period usual last between 12-15 days. After a fortnight or so after hatching the chicks will fledge the nest. The juveniles look similar to adult birds but are redder with a streaked head and nape and darker underparts.